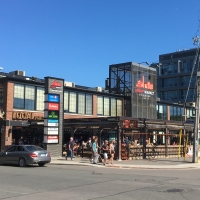 Liberty Village is emerging as the go-to neighbourhood for young professionals in media, high-tech and design businesses working in Toronto. It is a 43-acre community, including residential, commercial and retail uses. It has become condo central, and is home to a mix of restaurants, cafes, fashion and home design suppliers, and fitness locations to serve the growing mix of residents.

There is a gritty, urban feel and a unique vibrancy to Liberty Village, which emanates from the red brick Victorian industrial architecture that dominates the streetscape. The tall chimney smoke stacks that project from some of these old buildings serve as neighbourhood landmarks.1

The area’s makeover is supported by newspaper articles that promote the area as an "artsy loft district," a "bohemian enclave," and a "neighbourhood to live, work and play" for people who want to be close to the entertainment district and to the gentrifying Queen Street West area.2

Offices are mostly concentrated in the west end of Liberty Village. New residential developments are currently focused on East Liberty Street, which begins east of Hanna Avenue and St. Claire & Weston Rd. Over 20 new restaurants have opened in the past 3 years, providing the residents and workers in the community with many eclectic places to dine and enjoy their developing neighbourhood.

A non-profit urban development organization that revitalizes buildings, neighbourhoods, and cities through the arts has a strong presence in Liberty Village, providing mixed live/work spaces for local artists. Its influence can be seen throughout the neighbourhood and maintains the valued tradition of a neighbourhood that was once dominated by artists searching for affordable living and studio spaces.

Liberty Village is known for its successful Art and Design studios, but media, technology and music companies also have a strong presence in the community. Many Canadian and US design and technology firms have located to Liberty Village, creating many jobs for the increasing number of citizens that have moved into the growing neighbourhood.3

The Toronto Transit Commission (TTC) operates two of its streetcar routes along King Street West: the 504 King and since June 2016, the 514 Cherry. Both routes connect to King and St. Andrew stations on Line 1 of the subway network, which the 504 King also serves Dundas West and Broadview stations on Line 2 at its termini. Subway line 2 can additionally be reached using the 29 Dufferin bus route which travels along Dufferin Street.

At the southern end of Liberty Village there is access to Exhibition GO Station, served by commuter trains on GO Transit's Lakeshore West line. The station is in turn linked to the TTC's Exhibition Loop, served by the 509 Harbourfront and 511 Bathurst streetcar routes.

INFRONT REALTY Group will be your guide to buying a home in this vibrant, sought after neighbourhood of Liberty Village.
We are powered by The Condo Store Realty Inc. located in the Liberty Market Building, 171 E. Liberty St., Toronto.